Ah... Computer hardware! To many an unknown subject, sometimes scary, or in some cases familiar. Author of original illustration: Nocturnalfrog, modified for Alt Under Ctrl by Wrox.

The Alt Under Ctrl crew has an assigned member who manages the server infrastructure as their primary task, which currently is Wrox. Alt Under Ctrl (from now on "the community") owns or rents a total of 3 dedicated servers responsible for web pages, the forum and databases to store both web and game data, and the in-game playgrounds such as game servers.

A majority of the community's infrastructure is hosted on virtual machines (from now on "VM:s"), which are managed by the dedicated servers (referred to as "Hypervisors" in the Status & Data page). This method of using resources effectively splits processing power and memory within a dedicated server to several smaller servers, the VM:s. Additionally, this adds an extra layer of management. So why the usage of VM:s? 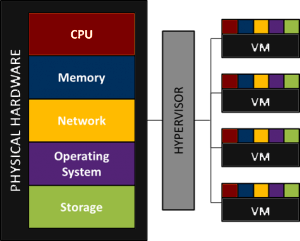 A VM is in the depicted hypervisor illustration one of several
VM:s hosted within one dedicated server.

As a majority of tasks and feature additions on the servers hosting the game servers are performed by humans, potentially fatal mistakes as a result of humanity can lead to simultaneous downtime of several services, such as web, database, game and content (fast download) servers, if those are not separated.
This can contribute to a fall in availability as services depending on databases, for example game servers with the "Bunny Hop" game mode would cease to respond. At the same time, the forum would not load for visitors. In addition, the content server serving files to gamers connecting to the community's servers would reject requests, effectively rendering new players unable to connect to any servers with custom maps, as they would not be able to download them.

The community's strive is to reduce the likelihood of this type of larger disruption from occurring. Splitting resources into their own instances is a step to increase redundancy and stability. In the event of one VM failing, the rest remain available. However, hypervisors hosting VM:s require a certain level of resources to avoid performance degradation while operating virtual machines. What hardware has the community decided to utilize for this task?

* Based on scores from PassMark Software's CPU Benchmark software.

Locations that have been discontinued

How resources are split

Please refer to the Status & Data page for current VM:s in use. Blue status colour indicates that the VM in question has been temporarily taken out of production.

Feel free to inquiry the currently responsible member Wrox for hardware and infrastructure questions through a Private Message feature in the forums.